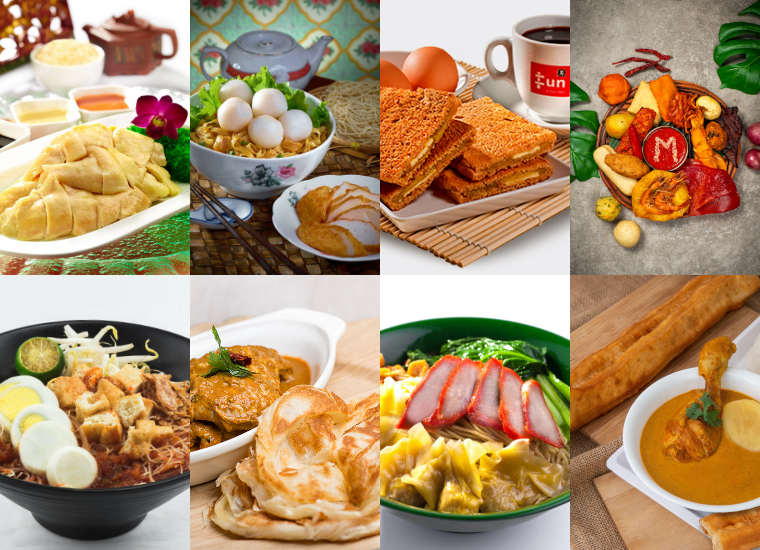 Celebrate the nation’s 56th birthday with a round of our country’s most iconic and beloved dishes.

Our nation's melting pot of cultures has created one of the world's most diverse, drool-inducing culinary landscapes. So, it’s no surprise that Singaporeans love food and are willing to queue up for hours to get their favourite dishes.

From talking incessantly about their last meal, to feverishly photographing and posting about it online, our love for food is insatiable. With National Day approaching, here’s a list of our eight local favourites and where you can get them. 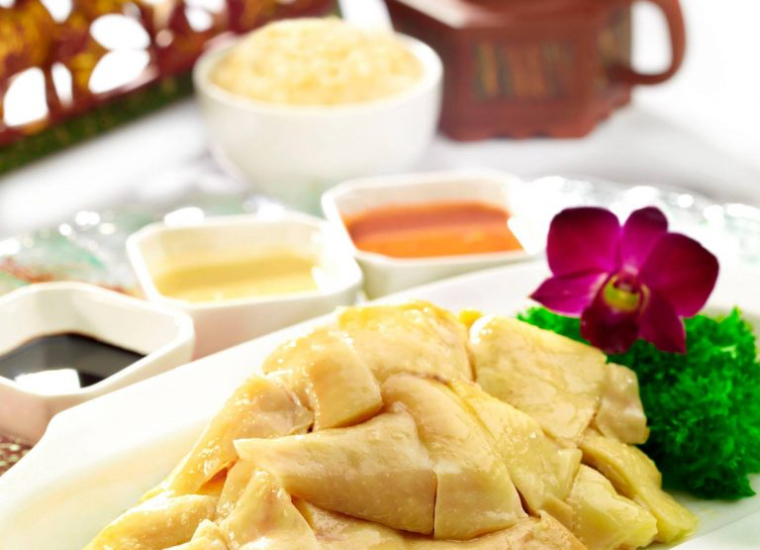 Widely regarded as a national dish, chicken rice in Singapore is often the spark of food wars and major debates as friends disagree over which stall serves the best version.

The recipe and techniques to make chicken rice came to Singapore through a mix of Hainanese and Cantonese cultures. Starting in Hainan, the original version was made with wenchang chickens (文昌鸡) — smaller and bonier than regular chickens. With the Cantonese influence, the recipe evolved to use pak cham kai chickens (白斩鸡) — white cut chickens, which are more tender.

A household name when it comes to this beloved dish, Boon Tong Kee first started serving its Cantonese-style chicken rice from a small stall in Chinatown back in 1979 before opening several outlets islandwide. 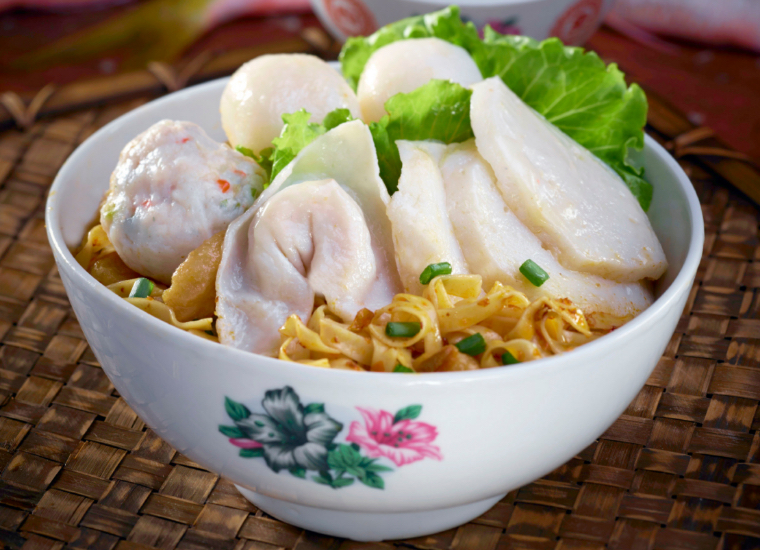 Balancing a tried-and-tested combination of clean and light flavours from the soup, toothsome noodles, as well as flavourful fishballs and fishcake, it takes true skill to execute this simple Chinese recipe and do it well.

Widely available in open air coffee shops as well as air-conditioned shopping malls, there are many options when it comes to this local favourite. However, one of Singapore’s leading purveyors of fishball noodles is 85 Redhill Teochew Fishball Noodles — originally located in Redhill Close, it is the predecessor of the Fei Siong Group, which was founded in 1995.

Although there are older establishments, 85 Redhill Teochew Fishball Noodles has captured the hearts and stomachs of Singaporeans thanks to its light and bouncy flavourful fishballs which are served with springy noodles — a great combination for a belly-warming meal!

Fishball noodles are served dry or in soup, and with a variety of noodles from mee pok (flat egg noodles, 面薄) to kway teow (flat rice noodles, 粿条 ). Whatever you decide, rest assured you won't be disappointed. 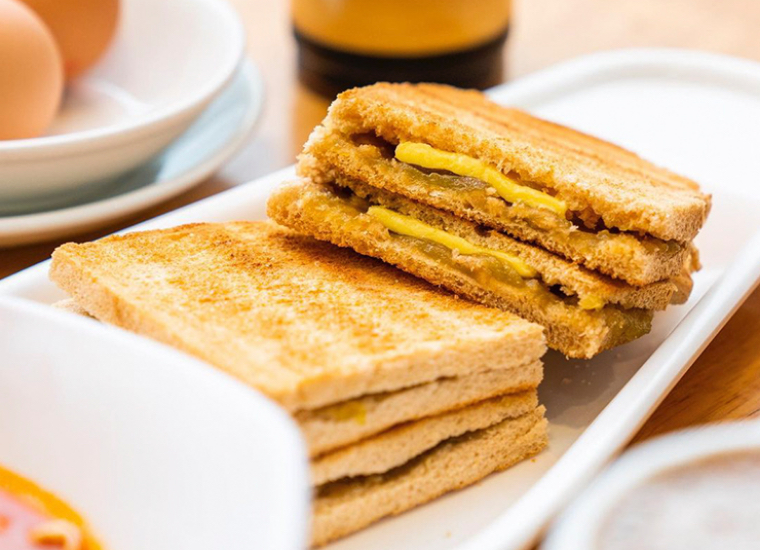 Comforting and nostalgic, Fun Toast’s kaya toast is served with soft-boiled eggs and tea or coffee.

This iconic breakfast staple and teatime snack can’t help but conjure up memories of the good ol' times sitting at a round wooden table.

The kaya (Malay for “rich”) toast origin story claims that the dish originated with Hainanese people who worked on British passenger ships as cooks. Eventually, they settled in Singapore and adapted the food they served to cater to locals, who could not afford the exotic fruit jams that were served during English breakfasts and teas.

These days, it’s easier than ever to find this sweet dish. You can get it in every corner of the country, from old-school coffee shops, to air-conditioned franchise outlets in modern shopping malls like Fun Toast (previously known as Kheng Nam Hong 琼南芳) — founded in 1941 by the grandfather-in-law of its current co-owner Ah Hian.

For your fix of creamy homemade kaya jam and cold salty slices of butter sandwiched in between perfectly toasted bread, Fun Toast is definitely the right place for a sweet taste of nostalgia. 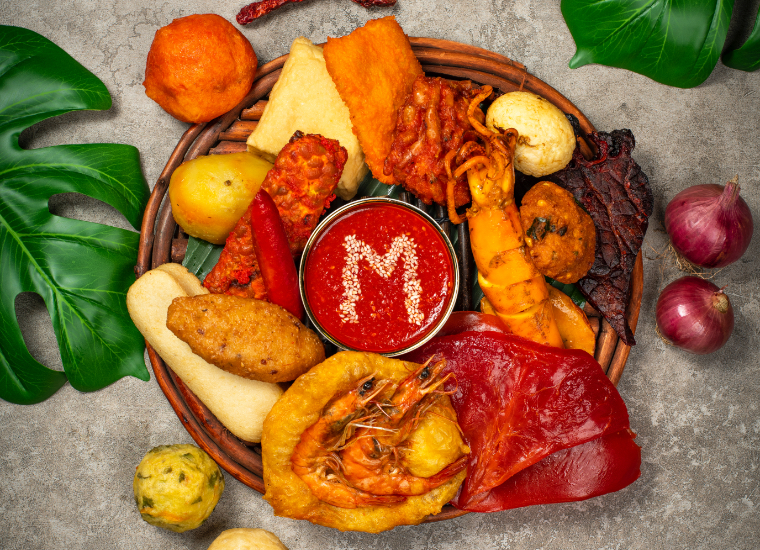 Ministry of Rojak’s “The Rojak Fondue” pops both in terms of colour and taste.

Rojak (Malay for "mixed") is a traditional salad, which is nothing like the leafy green salads known to the Western world. It is uncertain how rojak originated, however its storied past harks back to the glory days when rojak was hawked from pushcarts and bicycles on our city streets.

Truly a contrasting combination of both textures and flavours, rojak throws your taste buds into a sweet and salty frenzy. Since rojak literally means “mixed,” there are three main types in Singapore. The Chinese rojak often includes slices of fruit, fried dough fritters and bean sprouts, all tossed in a shrimp paste and palm sugar glaze. The Malay rojak usually features the addition of grilled cuttlefish and kangkong, while the Indian version of rojak includes a chopped-up mix of deep-fried fritters, potatoes and vegetables, paired with a sweet and spicy peanut sauce.

This brings us to Ministry of Rojak, an expansion of Abdhus Salam Rojak (hailing from Ayer Rajah hawker centre), which provides authentic traditional Indian hawker food with an innovative twist. Since its inception in the 1960s, the family business has been serving Indian rojak to loyal patrons who describe it as delicious and extraordinary.

Using rojak ingredients as the base and its famous sweet potato sauce as the dip, treat yourself and your family to the delicious flavours and textures of “The Rojak Fondue”.

Ministry of Rojak is located at Northpoint City. 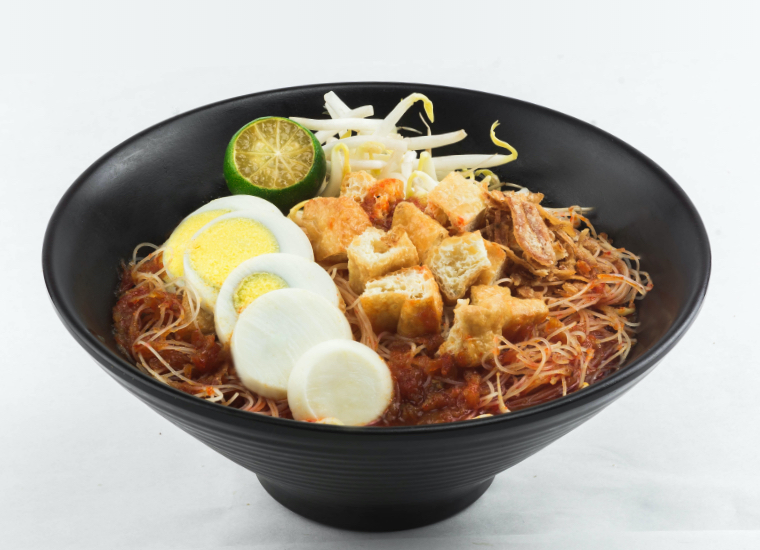 A familiar local comfort food that many of us grew up eating, Kopi Korner’s mee siam tempts you with its fragrant aroma.

You can’t call yourself a true-blue Singaporean if you haven’t heard of or tried mee siam (Malay for “Thai noodles”).

Mee siam is a dish that consists of bee hoon (rice vermicelli, 米粉) served in a unique sweet and tart gravy. Some believe the name of the dish refers to Siam, the old name for Thailand, and that the dish was influenced by Thai cuisine, while others believe that the dish is Malay or Peranakan in origin.

Whatever the origin is, many of us can’t resist the sweet and sour gravy of mee siam which is made with tamarind, sugar, shrimp, belacan (Malay for “shrimp paste”) and taucheo (fermented bean paste, 豆酱), poured over the bee hoon. The dish is then topped with slices of hard-boiled egg, fried tau pok (bean curd, 豆卜), bean sprouts and Chinese chives. A dollop of sambal tumis (a type of chilli paste) rounds off the dish.

If you’re up for something light but dense in flavour, head to Kopi Korner — a halal-certified concept stall created by Coffee Hive Group in 2018 — for your dose of this popular savoury noodle dish. 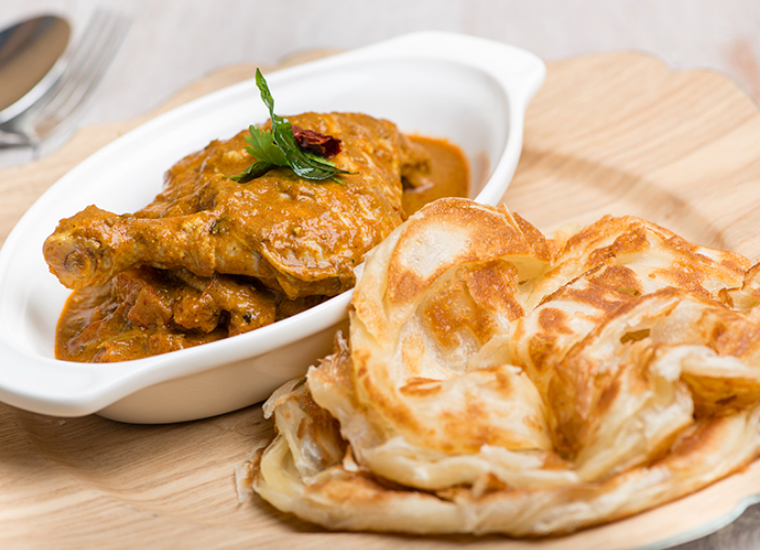 Prata Wala’s freshly made roti prata with curry on the side makes for the perfect meal at any time of the day.

It is not uncommon to see locals queuing for this simple yet delicious dish while watching as the dough balls are stretched, folded, flattened, and pounded several times over a steel surface.

Roti (derived from the Sanskrit word rotikā, meaning "bread") prata or paratha (Hindi for “flat”) belongs to a group of breads indigenous to India. Introduced to Singapore by Indian immigrants, roti prata is said to be either of Punjabi origin (as wheat dishes feature prominently in the Punjabi diet) or cooked up by the Muslim conquerors (who also specialised in making various types of bread).

Whatever the backstory is, roti prata is one of the most versatile dishes in Singapore. Plain versions are good conduits for sugar or the usual curries that accompany a plate, but recent years have seen even more unique toppings like cheese, chicken floss, chocolate syrup and Milo powder sprinkled between the pastry folds.

For this fluffy, layered, flaky and crunchy treat, look to Prata Wala — a halal-certified Indian restaurant known for its crowd-pleasing dipping dough and finger-licking chicken curry. 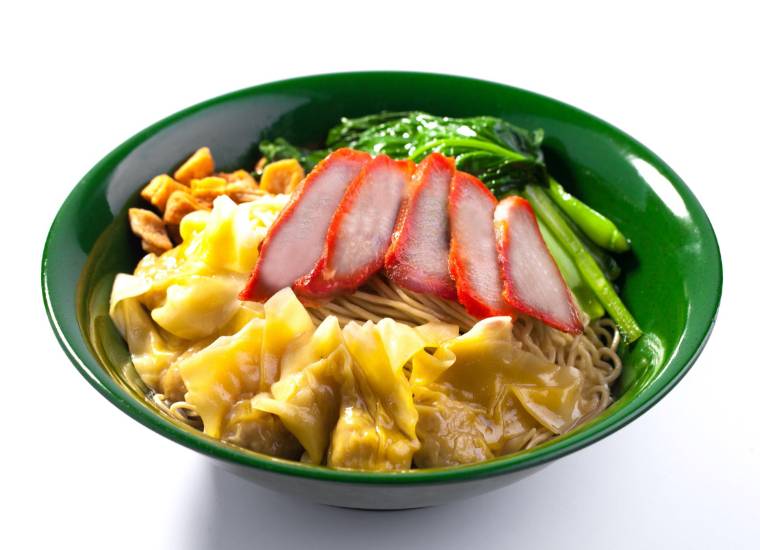 Eng’s Wantan Noodle has been serving up bowls of this humble yet satisfying noodle dish for the last 68 years.

The original wantan (also spelled wonton/wanton, 云吞) noodles came from Guangzhou, and was popularised in Hong Kong during World War II by an exodus of Chinese escaping the Japanese invasion. Yet the love of the dish is not confined to Hong Kong, with people in Malaysia and Singapore also enamoured by it.

Wantan noodles is topped with slices of char siew or char sui (roast pork, 叉烧) and a leafy green vegetable called kailan. Though it isn’t necessarily a spicy dish, the local version is served with pickled green chillies and chilli sauce on the side.

When ordering wanton noodles, you may notice there are two options — wet and dry. The wet version is served as a soup with all the components in one big bowl of soup broth. In the dry version, the noodles and char siew are served on a plate which is complemented with a separate bowl of soup with dumplings.

Both options are available at Eng’s Wantan Noodle — a heritage brand with 68 years of experience and well-known for its springy fragrant egg noodles tossed in a special dressing. Another distinctive feature is undoubtedly its super-hot, sweat-inducing chilli sauce. 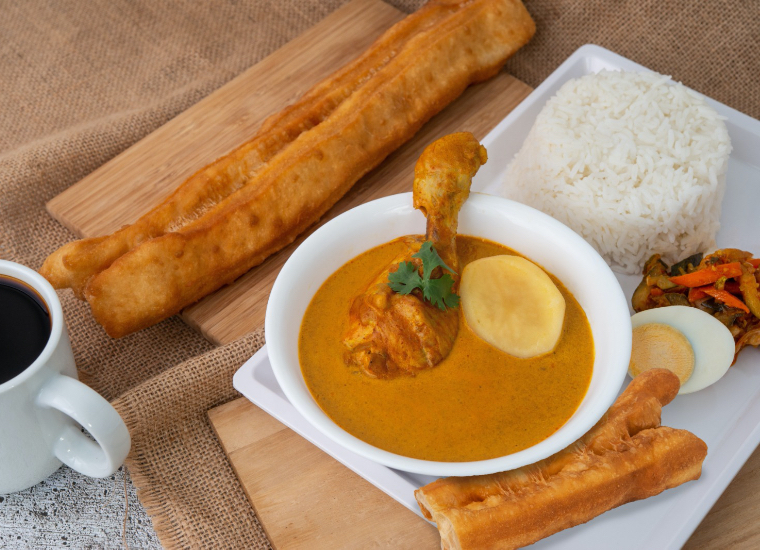 Mr You Tiao's menu features dishes such as curry chicken rice with you tiao.

Light, airy, and pleasantly chewy, you tiao (fried dough fritters, 油条) is a childhood staple loved by many. It can be eaten on its own, dipped in coffee or soya milk, served with congee or bak kut teh, or tossed in rojak. In the old days, you could easily find you tiao everywhere, mostly sold by street vendors with a small cart by the side of the road.

Don’t be fooled by its humble appearance. Making this outwardly simple-looking snack is a time-consuming task and requires attention to detail to get right, which is why not many people attempt this traditional recipe at home. Instead, leave it to the experts like Mr You Tiao, which has been frying up this labour of love since 2017.

Whatever you decide to pair your you tiao with, enjoy the golden ratio of crispy outer layers and airy insides with every bite!

Mr You Tiao is located at Century Square. Also available for takeaway and delivery on Frasers Makan Master.

Singaporean cuisine is as ethnically diverse as its people. A visit to any one of our hawker centres, shopping malls or food courts will be both eye-opening and gastronomically gratifying. With that, we hope that this list inspires you to celebrate Singapore’s 56th birthday by indulging in one or more of these tantalising local offerings.

For those of you enjoying the long weekend at home, skip the queues when you pre-order takeaway or enjoy all your favourite food delivered to you for free when you order with Frasers Makan Master. Plus, get a $5 Frasers Property Digital Gift Card on your first order and a $10 Frasers Property Digital Gift Card on your second order with a minimum spend of $25 per takeaway order or $30 per delivery order, made on separate days. That’s up to $15 in savings when you choose to feast with us! Find out more here.